"Equinox". Exhibition of works by Victor and Irina Kalinin

Viktor Kalinin belongs to the generation of artists who made themselves known in the 1970s. Pictures of a graduate of the Moscow Higher School of Industrial Art (former Stroganovskoye), a student of Geliy Korzhev, are in the zone of increased attention of viewers and the professional environment and in many ways set the vector for the development of contemporary art. In his works, the artist combines the classical foundations of the Russian school of painting and modern searches, artistic discoveries of the twentieth century, the depth of understanding of images with a powerful pictorial and plastic generalization. 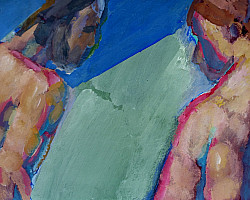 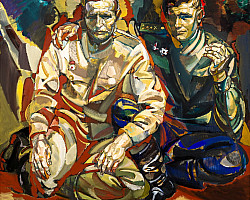 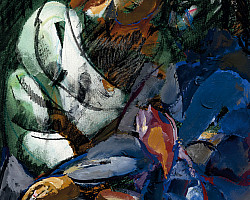 Graphic works, first shown to a wide audience in the exhibition halls of the Russian Academy of Arts, are made in a complex mixed author’s technique. Similar to quick sketches, these very small works cover a wide range of topics and carry a sense of confession. Emotions, reflections, experiences, embodied in colors, lines, accompanied by author’s texts - a kind of document of the time, a pictorial and poetic chronicle of a short, but meaningfully capacious period of V.G. Kalinin’s creative life. The author himself characterizes his work as follows:

“… From time to time there is a need to change the format of work, technology. Now you subordinate the material to yourself, then it leads you. Sometimes it doesn’t go where you originally directed it. I’ve been working on paper a lot lately. When you leave large canvases and start working in a small sheet format, you get the feeling that you completely own this small space. That mercilessly "cutting" it with a hard pencil, then "merciful" with soft oil pastels. Either you completely repaint with a dense layer of tempera, then you try to preserve its glow through the watercolor melts.

Gradually it becomes clear that in any scenario the paper, while retaining its "paperiness", begins to acquire the properties of an indestructible wall, as if causing it to correspond. As if she is not light, vulnerable, doomed to a fleeting existence, and your attempt to penetrate into her acquires these properties. Hence the storylines, and the emergence of certain characters who either ghostly slide along the surface of the sheet, then try their best to keep from sliding into oblivion…

This experience of working in a small format was useful to me during the isolation of 2020. And in addition to working with graphic materials, I had a need for their pictorial reading. Painting, as such and in small format, has its own advantages and characteristics.

As a result, about 200 works were created, united in one cycle, and it became possible to carry out this series in print. The book "In Shutter" was published. And now my works in small format are exhibited in the halls of the Academy… "

Irina Kalinina is a lyrical artist who knows how to see beauty in everyday life. The classical art school stands behind every work of a graduate of the Moscow Higher School of Industrial Art (formerly Stroganovskoe). She also calls her teachers in art the painter S. Fedorov, the sculptor-animal painter V. Vatagin, the painter V. Kalinin, who became a spouse. 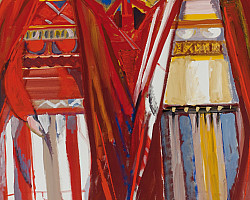 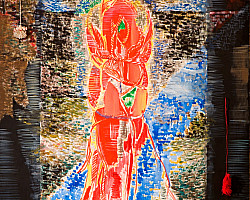 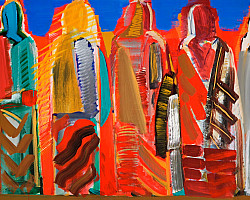 Irina Kalinina’s artistic images are always emotional, and her works are firmly connected with folk traditions. The author believes that the study of folk art and intuitive insights awaken in the soul the memory of what should not have been lost and becomes consciously necessary.

“Russian folk art entered my life from a young age - at first just as a natural habitat, and over the years it began to acquire a mysterious universal meaning…

The work of Viktor Grigorievich and Irina Pavlovna Kalinin gives an idea of ​​the complex perception of the surrounding world, an acute reaction to the surrounding reality, which they organically and on a large scale embody in their works.